We are currently 2 game weeks into the season and for both of the teams we’re going to be looking at today, it has been a bit of a mixed bag so far! Both teams are currently 1-1, the Saints starting off with a 27-26 win over the Falcons followed by a 20-10 loss over the Buccaneers. The Rams on the other hand started off with a 31-10 loss against Super Bowl favorites Buffalo before pulling back with a 31-27 win over the Falcons.

Now, we’re going to go a little more in-depth about these results in a moment, but for the Rams, being reigning NFL champions, they’ll be hoping they can build from their game week 2 win over the Falcons and push on with more, but for a team like the Saints that haven’t had a decent playoff run since their 2009 win over the Colts, their fans will be hoping they can escape another season of mediocrity. So let’s break down the Saints season so far first! 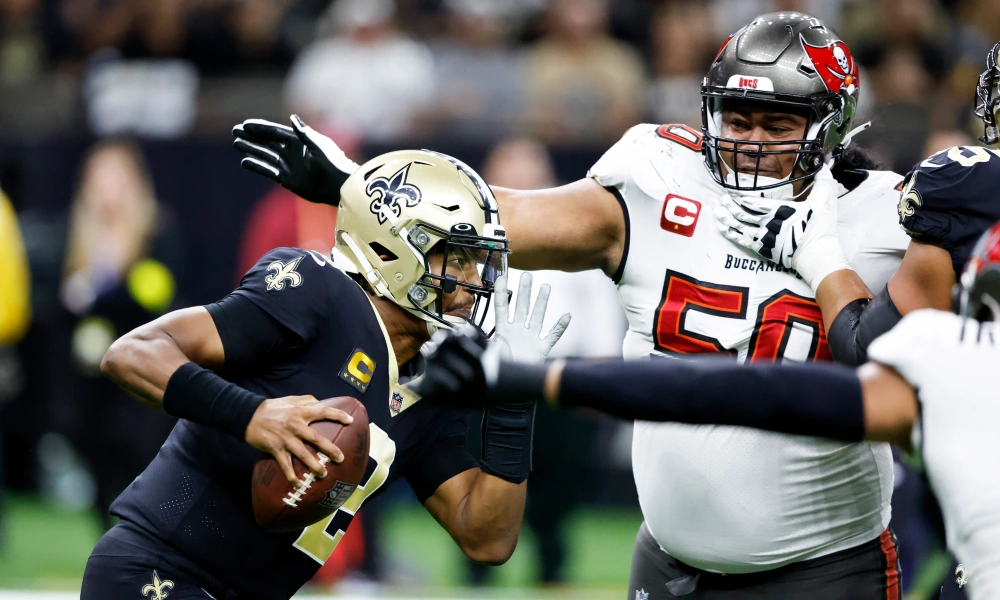 The Saints didn’t quite have what it takes to get a result against the Buccaneers, taking their first loss of the season. Source: USA Today

Let’s take a look at the Saints season so far. As we mentioned earlier, after two games the saints sit 1-1, but that game against the Falcons could have ABSOLUTELY been a loss. The Saints had to fight from behind to claim a 27-26 win, some might argue it was an incredibly lucky result, but in my opinion, you make your own luck in sport. The Falcons played very well but if you don’t concentrate for the full game you’ll end up slipping up for sure. And fortunately for the Saints, they managed to come out on top here. Showing real fire and determination to get a solid result to start off the season.

But what about their 20-10 loss to the Buccaneers? Did they LOOK like a team that should’ve lost 20-10? Well, honestly it was a pretty slow game. The Saints took a 3-0 lead in the first, but in a game that turned out to be a battle of the defenses, they just couldn’t quite get going. No score in the second before the Buccaneers tied it in the 3rd, but a 4th quarter collapse would see the Saints drop 17 points while putting up 7 of their own. A defensive collapse stopping them from taking a second W, after an ADMIRABLE fight back the week before is a little disappointing for the fans if you ask me.

Since we’ve looked at the saints, let’s check out what the experts are thinking for them, starting with their game this weekend for game week 3. For game week 3, the Saints travel to Carolina to take on the Panthers who currently sit 0-2, as you might expect they are favorites to take this one, but what odds specifically are we looking at? At 20/31 a $5 bet on the Saints will get you $8.21, whereas if you’re wanting to bet on the Panthers, a $5 stake on the underdogs will return $11.75 from their 27/20 odds.

Looking further forward to the rest of the season, if you’re a believer, a true lover of an underdog story and you really think the Saints could possibly make it their season this season, if you think the Saints might make it all the way and take the gold this season, they’re currently 40/1, a $5 stake here returns a massive $205. Now for the Rams as we transition into THEIR preview. When we started they were the second favorite to take the gold, but now after slipping to the Bills, they’re 12/1! FOURTH favorites, a $5 stake here gives you a $65 return, not a bad shout. But to get there, they need to win more games of course…

SO! for the Rams’ next game, checking out BetMGM Louisiana sportsbook odds for their match in Arizona against the Cardinals. With the Rams still being one of the favorites for the Super Bowl, it’s understandable they’re the favorites, even though both of these teams are 1-1. At 1/2 a $5 stake on the Rams will return $7.50, but the same bet on the underdogs from Arizona will return $13.50. Not too bad and you can’t underestimate the home-field advantage here, right? 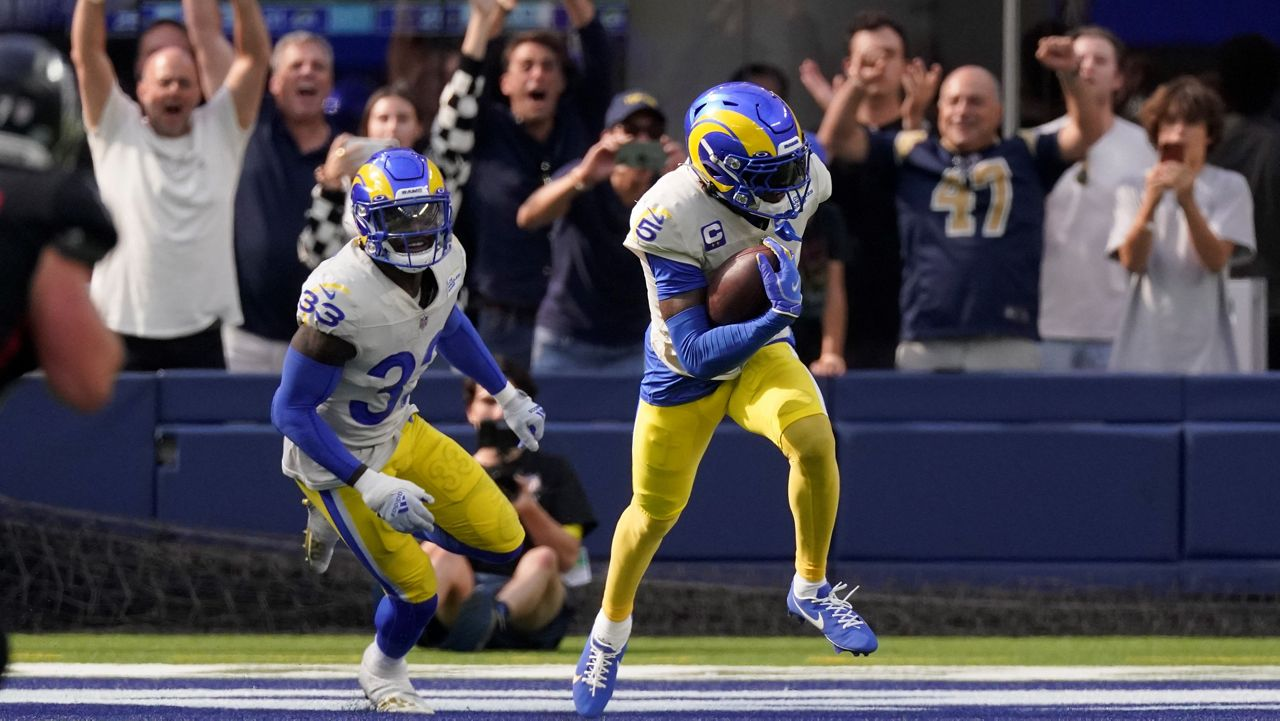 In what was a crucial bounce-back game, the Rams got their season off the mark against the Falcons to go 1-1. Source: ESPN

So, how has the Rams season gone so far? Well, as I mentioned, they started the season off as second favorites to take the Super Bowl, they now sit FOURTH favorites, but they did start their season off against the favorites, the Buffalo Bills. Honestly, a 31-10 scoreline really does reflect how the game went in this one, given the Rams had the home-field advantage AND they are coming into the season as reigning champs. I think Rams fans will have been a little disappointed in this one, a win against the Bills would’ve seriously put down a marker and made a real statement heading into the rest of the season.

BUT! They picked it back up against the Falcons. They got their season back on track. However, it wasn’t all smooth sailing. By half time the Rams had a 21-3 lead and with a 3rd period that saw the game go 28-10, I think it’s safe to say they definitely took their foot of the gas in the 4th quarter. The Falcons put up 17 points to the Rams 3 in a truly admirable fight back, but it wasn’t enough to put the Rams on a 0-2 start. But it wasn’t meant to be, they continue on their path and continue to be in the discussion as one of the favorites for the Super Bowl!

So that’s going to do it for this one. With what you’ve seen today Saints AND Rams fans, based on what you’ve seen in pre-season and your two games so far, how are you feeling? Do you feel confident? Are you making a deep playoff run? Should there have been more trade work done before the season started? What about for the Saints-Rams game in particular? Who’s taking it? Let’s get a discussion started..!

As for the neutral fans here, how are your teams getting on right now? Any Bills fans? You guys are kinda cruising right now, there’s a reason you’re favorites to take home the gold this season! Before the season kicked off the Rams were the second favorite, but after the first two game weeks, that now goes to the Chiefs. Are you guys enjoying the season so far? Bit of a close game against the Chargers in game week 2 huh?!

‘I am absolutely hot about it’: Cowboys legend Michael Irvin rips Amari Cooper for being unvaccinated against COVID-19

Chumlee Net worth: For What And Why Did He Convince Rick Harrison?

Chicago Med Season 8: Finally Wait Is Over! Where And How To Watch Season 8?