Storms are expected to increase in California on Thursday when tropical moisture and an offshore storm combine. AccuWeather meteorologists say that while a few storms may dump a lot of rain on some areas, the majority of storms will have little to no rain, which could contribute to an increase in wildfires.

According to a peer-reviewed study published in the journal Nature Climate Change, the western United States is experiencing the driest period in at least 1,200 years. At least eight of the past ten years in California have seen below-average rainfall, making it one of the most drought-prone states in the country. Many municipalities and localities have implemented water restrictions as a result of this. The state’s water limitations forced them to rely on water reactions once more in the last month.

According to the latest data from the US Drought Monitor, about 98 percent of California was in severe drought or worse as of mid-June.

This week has already seen several wildfires break out across the state. Two acres of brush were destroyed by a brush fire in the Hollywood Hills of Los Angeles on Monday night, with multiple LAFD aircraft sent in to help suppress the blaze. Due to the fire, there were no evacuations.

Redwood City, California, located outside the San Francisco and Oakland metropolitan areas, was evacuated on Tuesday due to flames in the Emerald Hills neighborhood. There was an “urgent threat to life” and “possible hazards to local property” stated in the evacuation notice for the Edgewood Fire. Tuesday afternoon, according to local authorities, all evacuations had been completed.

In the aftermath of the fire, more than 11,000 electricity customers in the San Francisco Bay Area lost power, with 25 acres burned as of 6 p.m. PDT Tuesday. A firefighter was taken to a nearby hospital by ambulance after he was hurt while attempting to put out the blaze. The condition of the firefighter is yet unknown. As of 6 p.m. PDT on Tuesday, the Edgewood Fire had just 0% containment, despite the efforts of at least four aircraft.

When a surge of midlevel atmospheric moisture and a jet stream disturbance come together, meteorologists at AccuWeather worry that dry thunderstorms might develop throughout parts of California on Wednesday and Thursday, AccuWeather Chief Meteorologist Jonathan Porter warned on Tuesday.

Lightning strikes have occurred in the past when this kind of setup was present, according to Porter. We have a scenario where there can be a lot of lightning and very little rainfall because of the severe drought conditions over the last few years, and this can be a huge issue for sparking new wildfires because of the dry land and dry air near the ground.

The August Complex Fire, the largest wildfire in California history, was started by lightning in August 2020 and scorched more than 1 million acres. More than 900 structures were burned across seven counties, and one person was killed in the incident.

According to Porter, the current danger is equivalent to the 2020 risk.

A greater quantity of tropical moisture from the eastern Pacific was flowing northward into California in that case. “Sometimes lightning can strike a tree, for example, and the tree can smolder for a time until gusty winds produce conditions that can lead to fire spread,” he said. “We may have just enough moisture and lift to produce thunderstorms that could pose a serious risk for many fires to be sparked in the coming days and even a week or more out.”

There were more than 3,500 lightning bolts registered in California between midnight and 10 am PDT today. Some, but not all, of these lightning strikes hit the ground, and more hits are expected through Thursday.

During the dry season, which lasts from spring through summer and early autumn, there are few chances for rain to fall. Between June 1 and September 30, Downtown Los Angeles sees an average rainfall of fewer than 0.25 inches. The Sierra Nevada receives an average of 1-2 inches of rain over four months. 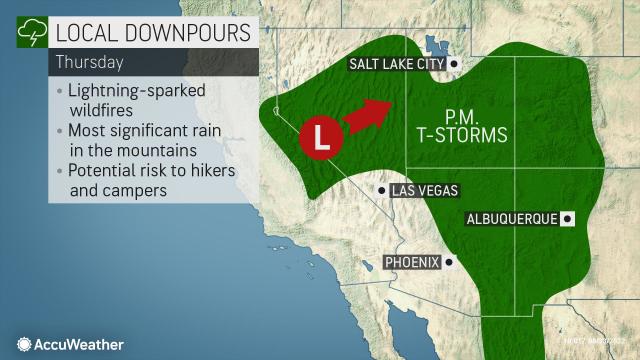 A tenth of an inch or less of rain fell throughout the central and southern parts of California on Thursday morning, as forecasted during the overnight rain and thunderstorms. The mountains and deserts received the most of the rain. On Tuesday night, rain fell on Lancaster, a hamlet 50 miles from downtown Los Angeles, as well as on Mohave and Edward Air Force Base, both of which received 0.42 inches of rain. Long Beach had 0.11 of an inch of rain, whereas Los Angeles and Las Vegas barely got a few drops to 0.01 of an inch of rain.

From Thursday to Friday, the chances of rain in Nevada, Arizona, Utah, Colorado, and New Mexico will decrease.

Over the past few days, southerly breezes have begun to sweep across the central Southwest from the east. The North American monsoon is the name given to this shift in wind direction from the west to the south. Rain and thunderstorms have descended on parts of the region as a result of the increased moisture.

Several days of rainfall have recently occurred in New Mexico, which will aid in the fight against wildfires. More than 864,000 acres have burnt in New Mexico so far in 2022, compared to an annual average of 270,000 acres, according to the Southwestern U.S. Coordination Center, with only half of the year gone. About 17,000 acres of Californian forest had been destroyed by wildfires as of Friday, June 20.

California has escaped the worst of the Southwest’s wildfires in recent months, but enormous blazes are raging in New Mexico and Arizona.

Unlike the monsoon pattern, California’s risk of limited rainfall has evolved from a distinct weather-maker. Storms that weakened off the Pacific coast allowed some precipitation from Tropical Rainstorm Blas to be brought north, AccuWeather Senior Meteorologist Heather Zehr said.

At one point in June, Blas was an extremely powerful Category 1 hurricane that churned off the coast of Mexico before losing power this weekend. Hurricane Irene was downgraded to a patch of clouds and rain over the Pacific Ocean near Baja California, Mexico, on Monday.

Thunderstorms may provide brief downpours, but there is a chance of repeated lightning strikes distant from the showers, which might fuel wildfires, Zehr warned.

According to AccuWeather meteorologists, dry vegetation can quickly catch fire in areas where there are no immediate downpours.

Additionally, some incidences of blown dust can significantly limit vision for drivers during thunderstorm activity. When enough rain falls in a short period, flash flooding and debris flows can occur. Urban regions and areas with fresh burn scars are the most likely places to encounter these dangers.

The combination of rain and oil on the road can lead to slick conditions, experts say, so drivers should slow down and give themselves more stopping distance when it rains.

To avoid being struck by lightning, hikers should be aware of fast-changing weather conditions and steer clear of exposed ridges. Similar precautions should be taken by hikers and bikers to avoid normally dry streambeds that could be flooded by rains miles away.

End-of-week thunderstorm activity is expected to fade, and moisture will shift to the east and north of the region.